“I got action!” (a few things I learned on the streets about manhood and women) — Mickey Z. 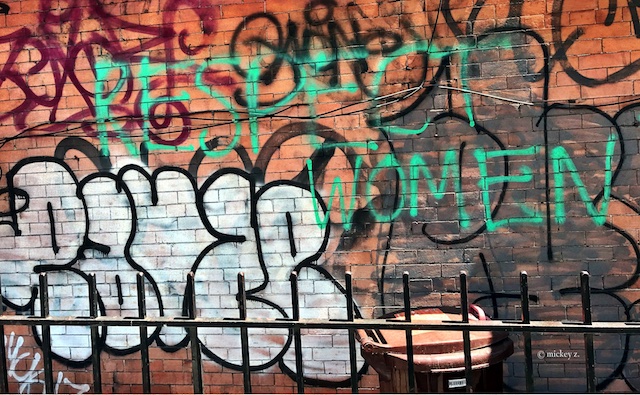 Since it’s become both hip and profitable, the umbrella name of “Astoria” is now used to cover a lot of real estate. When I was younger, the specific area where I grew up was always called Long Island City. It was a working-class, urban, industrial setting of asphalt, tenements, factories, and a few old cobblestone streets. High crime, low greenery, ethnically diverse but often divided (except for when we played sports), In such a setting, my friends and I were left to our devices in terms of having fun. This often meant roaming the streets in small gangs — looking for “adventure.” When we were about 12 or 13, we discovered the (now defunct) Turf Club Motor Inn.

The Turf Club was a standard “short-stay” joint. Some of its first-floor windows faced the street — low enough for a juvenile delinquent on his tiptoes. So, whenever we’d pass, we’d each peek into a few different windows until we found one matching these criteria: something was going on and the curtains were open just enough to see a little of what that something was. 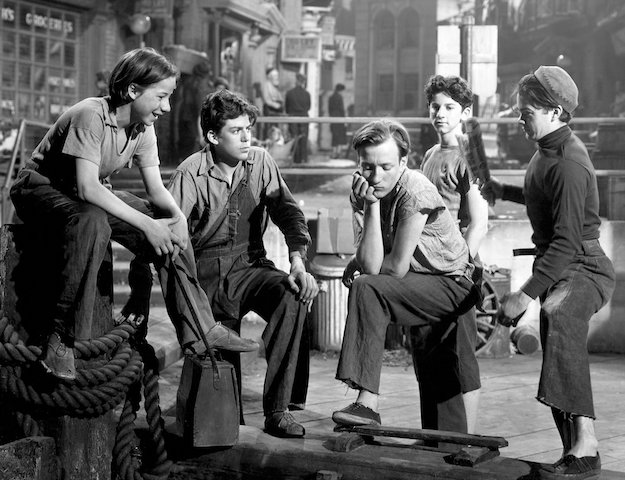 What we did have, however, was perhaps more face-to-face patriarchal conditioning. In the pre-Internet and pre-smartphone days of yore, humans interacted differently. Thus, our male elders played a direct role in our programming. For example, when our group talked about the Turf Club, the older guys would explain the dynamics we partially witnessed: Men who were cheating on their wives and girlfriends used cash-only rooms in a “shady” part of town. No paper trail and virtually no chance of being seen in a world without today’s 24/7 surveillance. As boys, we simply accepted these premises: Men cheat (but not any of our fathers, uncles, brothers, etc. of course), there is an endless supply of sex-craving women, and wives and girlfriends go along with it to keep the peace and maintain their financial security. The Turf Club was just there to keep things in the shadows, to allow for the illusion of trust and honesty.

I don’t recall any of us ever passing moral judgment on this. We had already been conditioned to recognize it as the natural order of things — a natural order we were expected to grow up into. We’d all eventually have a wife who adores us, a son who plays sports, a daughter who doesn’t date boys until she’s at least 18… and a secret hideaway like the Turf Club where we can express another aspect of our manhood. 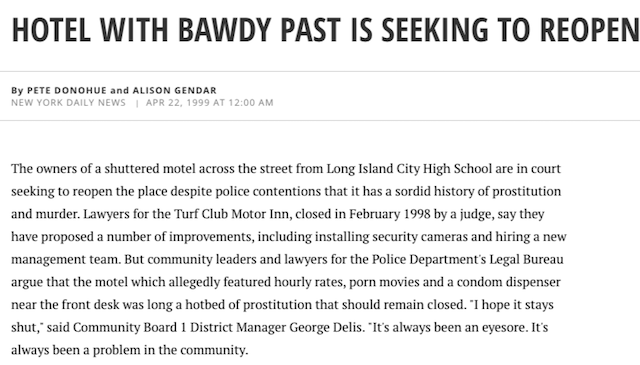 There’s more. There’s always more. Not surprisingly, the Turf Club became a regular venue for pimps, johns, and prostituted women. Over time, even the newspapers were writing about its “sordid history of prostitution and murder” and the establishment was eventually shuttered. I say “not surprisingly” because it was common for decades to see prostituted women and girls lining the streets of Astoria/Long Island City each evening at sundown. Less than a block from the five-story walk-up I called home, there’d be many such women and girls. As we become old enough to be outside more than inside, my parents cautioned me and my sister to steer clear of them. “They all carry razor blades,” Mom warned.

By the time I was 12, such a warning only served to spark my curiosity. My friends and I would sometimes jump out and surprise potential johns when they’d slow down in their cars to talk with a woman. “We got your license plate number,” we taunt. “We’re gonna tell your wife!” (Of course, the Turf Club had already taught us how common and “normal” infidelity is.) Such behavior raised the ire of the prostituted women but also provoked the sheer rage of nearby pimps. We learned quickly to have an escape plan under such circumstances.

As I hit 13, I was out later and later on the streets. Plenty of times, when I walked home alone, I’d pass a parked car in which a john and a woman he’d bought were, um… completing a transaction. In those cases, yeah, I might take a peek. But being alone on a dark, desolated side street and knowing a pimp was somewhere watching within a half-block distance usually kept me moving. 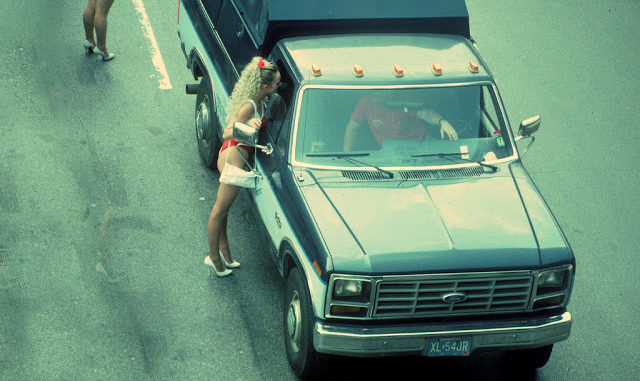 My mother had stopped bothering with her cautions and warnings by the time I was 14 and an unexpected incident made it clear I had garnered more “wisdom” than she in the ensuing years. I came home one night to find her looking out one of our fourth-floor windows. She called me over to join her. Across the street from our building was a large parking lot. It was full all day with factory workers. At night, not so much. Mom pointed to a car parked in the shadows with a man standing nearby.

“He must be a lookout,” she posited. “I think a big drug deal is happening.” Needless to say, this captured my attention so I continued watching with her as another guy emerged from the car and switched places with the alleged lookout. “Maybe the second man’s buying drugs now?” Mom wondered aloud. I looked at her in surprise. “Ma,” I began, “there’s probably a prostitute in the backseat and those guys are taking turns.” My mother’s face displayed a blend of shock and disbelief just as the car door opened again. This time, a young woman got out. She was wearing hot pants and a tube top as she walked away as best she could in huge platform heels. Mom looked at me for a few seconds before silently walking into the kitchen. 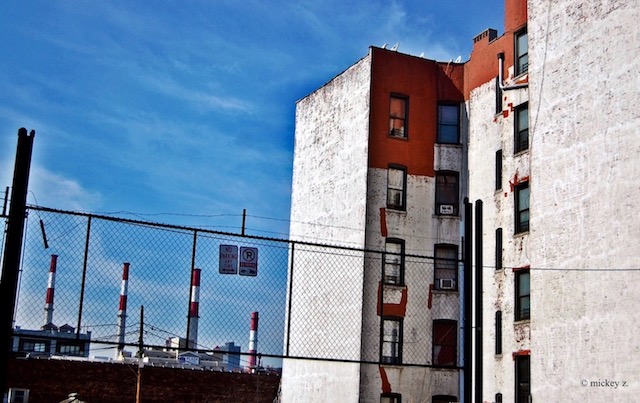 Of course, it never crossed my mind (or my friends’ minds) how those girls and women ended up being bought and sold on street corners, parking lots, and backseats. That wasn’t part of my hive mind conditioning. Based on the music I enjoyed and the films I watched over and over, I was taught to not wonder if females were ever exploited, oppressed, used, and abused. But again, this was in a time before pornography became the default setting — before literal children learned about “sex” from free video clips on their smartphones. My stories almost seem quaint yet it still took me decades to even begin recognizing the programming. Imagine how it is in the minds of today’s young men who became porn-sick before puberty…

I’ve come to see how important it is for men to identify their early influences. In order to change, it’s essential to know what molded our masculine, male supremacist mindset. It’s also essential that we try to rescue the minds of today’s male youth. As Gail Dines explains, “The porn industry has hijacked the sexuality of an entire culture and is laying waste to a whole generation of boys. And when you lay waste to a generation of boys, you lay waste to a generation of girls.” Translation: Name the problem. This article describes merely one way our shared culture can be. Turn off your devices and allow yourself to imagine all the other incredible possibilities.

Mickey Z. can be found here. He is also the founder of Helping Homeless Women - NYC, offering direct relief to women on New York City streets. To help him grow this project, CLICK HERE and donate right now. And please spread the word!